My coworker correctly diagnosed me with a serious case of “life interruptus” recently. I accept her expert opinion. Since my last update, there have been a few developments on the writing front, but many more developments in all other directions.

January saw a poem of mine published online and in print in Haiku Journal #56. A few months later, another poem of mine appeared in the Spring 2018 issue of Teach.Write. Links to both can be found under the POETRY tab on this website.

I am still querying for my completed YA novel. I am sure anyone who has experience querying would agree that this stage is all about patience and confidence, but it is sometimes hard to have either. There have been many quiet mornings and late nights when, if I did not have faith in this novel, I would have been tempted to throw in the towel. But I believe in this novel. It is something that needs to be out there. It is something I want to hand out to my students for free, I believe in it that much. So I’ll keep on until I can grab someone’s attention and find representation.

We are now just two months away from the end of the school year, and I know that somewhere in there my baby boy will be showing up. Words cannot describe how excited I am to hold him! In the meantime, I am researching my next big writing project. It keeps me up at night—in the good way!

Here we are at the end of 2017. It’s been an incredible year for me in my personal life, but more on that later. With the holidays and work taking so much of my time and attention these last two months, I decided to combine November and December into a single recap. With things on the writing front moving at the speed they do, I might end up doing bi-monthly recaps from now on, anyway.

I’ve still been writing during the past two months, so have no fears there. It’s just that the time I’ve had to write has been a bit limited. In November I spent most of my writing time not on fiction, but rather on honing my “Teacher of the Year” essays so I can hopefully get to the next round. I don’t expect to “go all the way,” but I feel that I need to do my best to represent my school. I know that my principal would love to have me get pretty far, so I wanted to make sure my essays and my resume were as polished as could be.

At the end of October and beginning of November, I queried a few agents for my YA novel. I expect to start hearing back from the bulk of them in the next month or so, especially now that the holidays are wrapping up.

In addition to that, though, I’ve finally given some attention to a short story that I’ve been thinking about for a while. I like where the draft is right now, and I hope to finish it up in the next few days. However, I’m coming up on a decision point for this particular story. The story is unfolding exactly how I planned, but I feel like I have more to do with this particular lead character, so I’m considering adding a bit to the story. In essence, I would be writing a “Part I” and a “Part II,” should I decide to extend it.

Additionally, I have a very good idea what my next long writing project will be. I had a thought that is turning into an obsession, which is usually a good sign that I could devote months of my life to this idea without getting bored. It would be something new and different for me, which is exciting, but with some of the upcoming changes in my personal life (see below), this project would be a very lengthy one.

I have to say: 2017 has been an amazing year, personally. In 2016, there were three major things I wanted in my life. I wanted to buy a house (we moved in last December/January), I wanted to focus on my writing and have some publishing success (thank you StoryHack #1!), and I wanted my wife and I to have a baby. Guess what! We’re pregnant!

The baby is due in May. Our “baby announcement” was cool and unique, too. We painted the local “graffiti bridge” the Saturday before Thanksgiving. I got a lot of honks from passersby that I assume were congratulatory. We’re now thinking of names. I like traditional names, my wife prefers names that aren’t a dime-a-dozen, so we’re making a list and trying to find something that satisfies us both, sounds good with our last name, and that my wife’s family can easily pronounce (they don’t speak English). 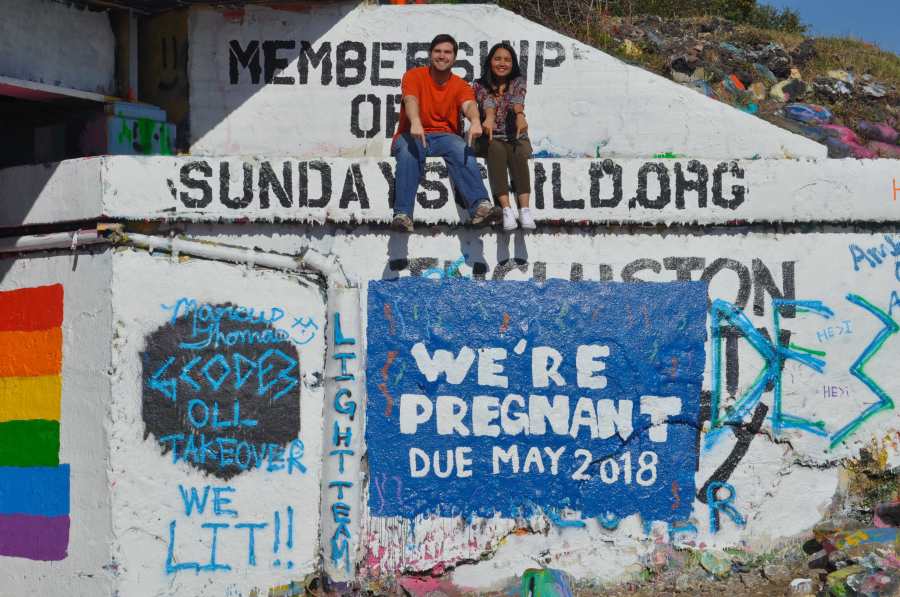 Honestly, every prayer of mine was answered in 2017. Adding in the unexpected success I’ve had in my profession, I feel blessed beyond what I could possibly deserve.

October has come and gone.  I just packed away my foam-muscled Thor costume and I have fake cobwebs to remove from the house.  Store shelves are empty of fake skeletons, already replaced by Thanksgiving centerpieces and Christmas ornaments.  That means it is time for my October recap!

My significant publishing news from October is that a poem of mine has been selected for an upcoming issue of a lit magazine.  I had been shopping this one around for a while, afraid that it would never meet an editor who saw a place for it in their magazine. But lo and behold, it finally arrived at a place that could not be more perfect for its topic.  The issue that will feature the poem will not be out until spring, and the editor has only sent me a confirmation so far, so I don’t think it’s my place to announce the magazine yet.  Rest assured, I will announce it and link to the source when the time comes.

Early this month I got some INCREDIBLE feedback from test readers of my novel, which confirmed some things that I thought might need revisiting.  I spent most of my writing time this month revising, re-reading, and revising again.  I feel really great about the state of the novel now. It has gone through I-don’t-know-how-many drafts, and I dare say it is finished!  I began querying agents in the last week of October, which I know is just the start of a whole new cycle of anticipation and agony.

I also polished a poem and a short story and began submitting both to journals.  In the meantime, I was approached by a writer who would like to co-author a book with me.  It is pretty exciting, but also a little bit nerve-wracking only because I have never co-written anything. I think the biggest challenge will not be collaboration (I can handle that), but my own tendency to be self-critical and my fear of letting my co-writer down.  But I’m always game for something new, and I think this will be a good experience for me.

Looking back over the month is helpful because in the moment, I feel like things aren’t happening fast enough, but in retrospect, I can see that things are moving forward.  A month from now, I hope to have some good news about my novel, but I know that at this point things are out of my hands, and it might be a very long process to find representation.  Thanks for reading.  If anyone has querying advice or personally knows an agent, let me know!

First of all, September was huge because editor Bryce Beattie’s new pulp magazine, StoryHack Action & Adventure, came out. It includes my short story “New Rules for Rocket Nauts,” which is also featured on the cover. It’s a very high quality production, and I hope this issue is the first of many.  It’s available in print and electronic versions (I prefer print, but I know the Lorax is winning and lots of people are moving towards electronic).  You should definitely check it out at the links below, encourage others to read it, and leave a review.

In other writing news, I wrote and edited two short stories and one poem in September. I’ve submitted one of the stories already, but I’m holding the other one until I find the right venue for it. I’m not yet sure what I’ll do with the poem, but I’ll be sure to make an announcement when/if something happens with any of these.

For now, my goal is to write or edit a few things every month, and make submissions when I can. In October, I know I’ll be focusing most of my attention on editing my Young Adult novel since I will have some feedback from test readers coming in soon.

In non-writing news: we’re a month and a half into the current school year. I’m enjoying my classes this year, especially my new World Lit class, but naturally my teacherly duties—as well as collateral duties—mean less time for writing.

That about wraps it up! September was an exciting and productive month, but I’m looking forward to October to cool things off and make it finally feel like my favorite season has arrived.